Sustainability
Community Arts
Arts
At Persico Group we think that art encompasses all human activities capable of creating aesthetic expression.
For many years now Persico has collaborated with artists and designers to give shape to timeless works using innovative materials and technologies.

Cracking Art Group animals
In 2007, by "adopting" a rabbit, art promoter and nature lover Persico Group became a supporter of the philosophy of the Cracking Art Group, an artistic movement espousing sustainability and environmental conservation. 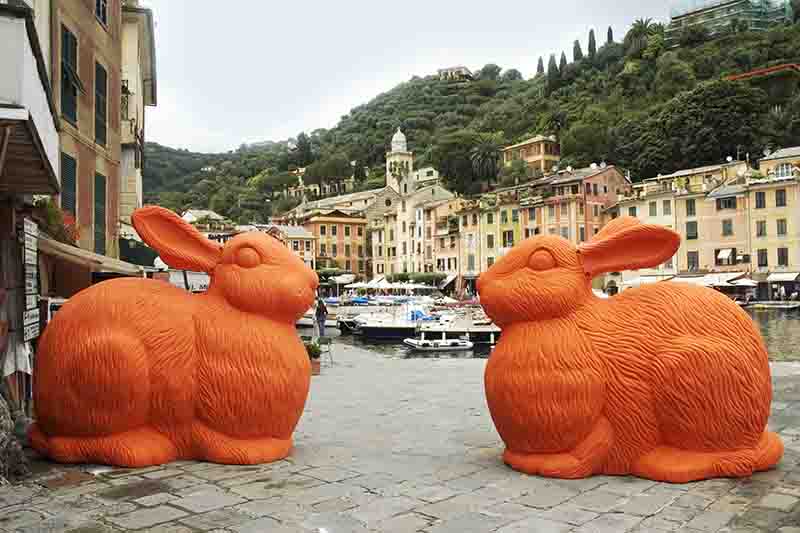 This group of artists cares for the wellbeing of the planet Earth and mass-produces artwork (animals for the most part) from recycled plastic using rotational moulding technology.

From the very beginning, Persico has made the moulds for the Cracking Art Group's creations.

Svaso – the non-vase
Roberto Talaia, architect and entrepreneur, has successfully employed rotational moulding technology to meld design and art in his Svaso (the non-vase), mass-produced by Donato Corrado.

A vase-non-vase, an example of the art of our time: colourful, chrome-plated and floodlit.

A spiral challenging the concept of space. Ugo Nespolo, the great cosmopolitan artist, took up Mr. Talaia's challenge and revisited the Svaso creating ten different personalized variations of it – a great artistic achievement.

Twenty limited-edition versions of Mr. Talaia's Svaso have been created: ten in different colours and finishes, and ten transformed into sculptures by Mr. Nespolo. 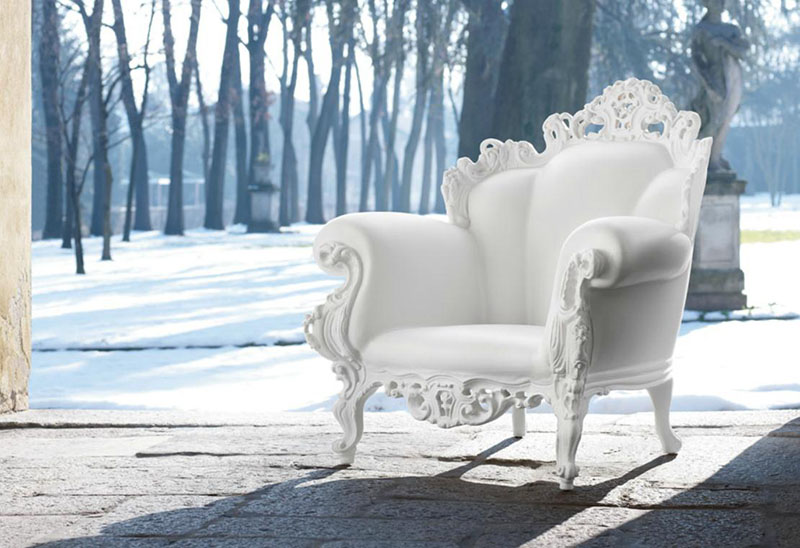 The artist comments: "Many people should already be quite familiar with my piece called the 'Proust Armchair'. It is a romantic baroque armchair, hand-painted with an endless number of polychromatic dots using the pointillist technique.
Dots cover the whole armchair and its fabric, as well as the carved wooden frame. It is a work of Redesign. As a matter of fact, it is a collage of a faux-antique armchair and the detail of a meadow by the French painter Signac. Since 1978 the Proust Armchair has been reproduced in many versions, in different colours, materials and sizes. It has even been made in ceramic and bronze. It has travelled all around the world and has been exhibited in many museums."

Now for some truly unexpected news. A paradox has become reality. The Proust Armchair has become an industrial rotational-moulded plastic object: the new Magis Proust Armchair. It is a technical wonder and production jewel. New colours and shades energize a timeless object. The Persico Rotomoulding Division is proud to have played a part in creating the Magis Proust Armchair by collaborating with Magis all through the various production stages. Persico manufactured the CNC mould with the support of its in-house engineering department.

The architects Anna Popelka and Georg Poduschka, with contributions from the designers Margarita Navarro and Ludwig Slezak, created the Enzos: abstract forms that are open to a variety of interpretations by their users; robust, washable objects that can be combined in endless variations to form new and always different structures.

These pieces stand in the courtyard of Vienna's MuseumsQuartier. 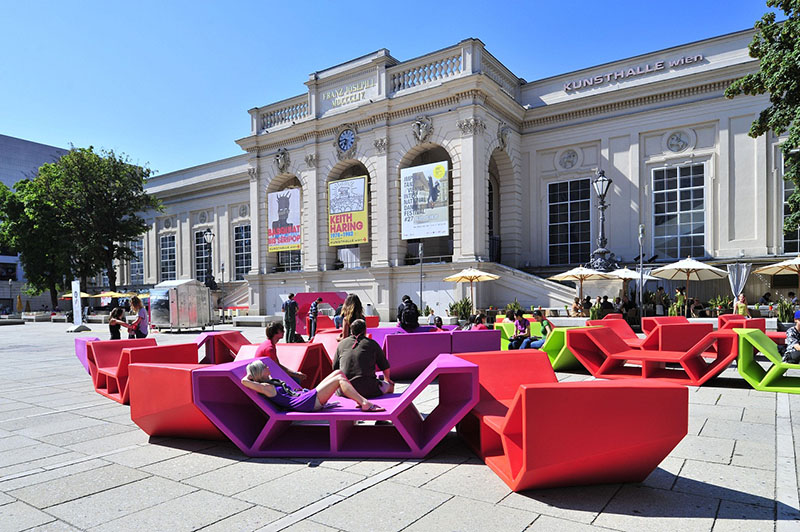 During the summer, the Enzos become lounge chairs of an extravagant shape and colour, which can be hooked up to each other and laid out in various ways.

During the winter, they are stacked up vertically to form igloos or booths selling hot punch, "cinemas in the cold", ice labyrinths or fences. 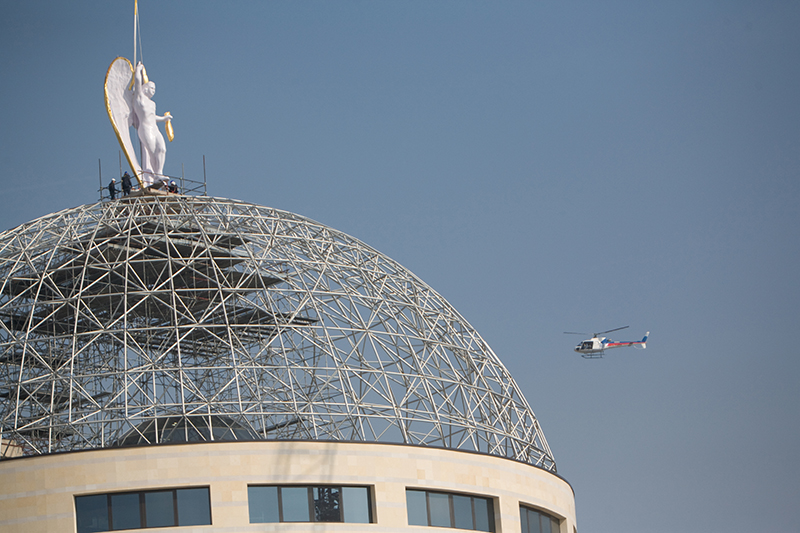 The statue was installed on the Milan San Rafael Hospital dome at a height of a 56 metres.

Finite element structural analysis was performed to estimate the dynamic response of the statue to weather conditions, specifically, wind loads of up to 250 km/h.

The project started off with a human-sized polyurethane model of the statue, which Persico moulded from a design created by Carmelo Lizzio in collaboration with Lucia Arduini.

Mr. Lizzio began his work as a sculptor in his father's bottega (workshop). He has long collaborated with Salvatore Fiume and the company Arte Sacra in Bergamo.

For San Rafael Hospital, he has also made the five high-relief marble panels adorning the Esplanade of the Good Samaritan.

The San Rafael Archangel statue is equipped with displacement sensors and weighs 3,500 kg (this upper limit of the statue weight was due the limitations of the available hoisting equipment). It is also equipped with an anti-freeze system, which protects the most critically exposed parts.

The Ciborium – San Rafael Hospital, Milan
Additionally, in 2008, Persico created a "floating" altar housed in the so-called Ciborium of the hospital, based on a concept by Don Verzè.

The altar, made from cypress, durmast oak and ash wood, is reminiscent of Noah's Arc and can be reached by a walkway.

It is located inside the Basilica, which is open to university students. 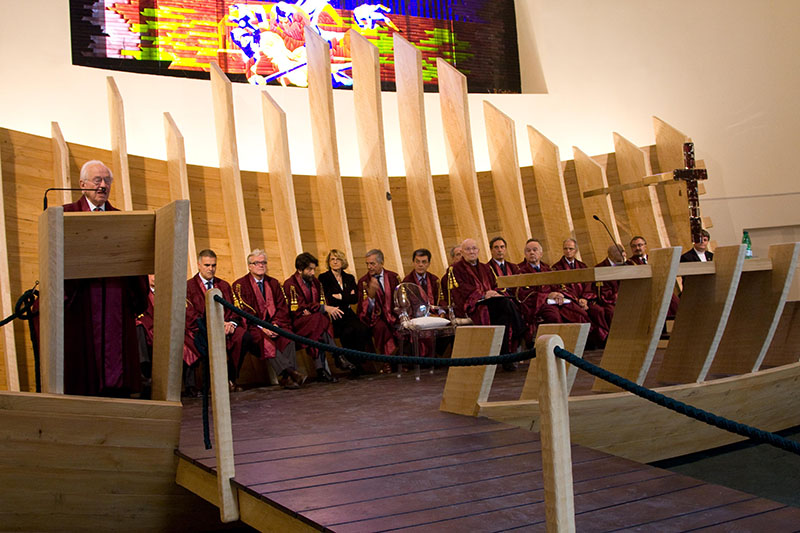 The Basilica has no pews, only a few seats where students of all religions can study, exchange ideas or meditate in total silence.

There is no altar chair for the officiant, as Don Verzè viewed it as a thing of the past, but only a rock set into the wooden structure.

No chairs, just one bench, the symbol of a church unified to form only one body.

A wooden DNA sculpture, the symbol of evolution and conservation of the species, hangs in the centre of the Basilica.

Furthermore, at the Persico headquarters, one can find the works of well-known artists on display:

Small wonder then that no better artist could be found to pleasantly intrude into Persico's premises than Livio de Marchi: "…with astounding skill in moulding materials. He transforms material with an ironical sensitivity that moves him to create sculptures with perfection of detail as well as spontaneity and essence.…Wood has always been his favourite material because it gives him a vitality that other materials do not."

Tino Sana
The artistic genius of Tino Sana, master wood craftsman, has brought to life a unique work: the most exclusive and precious bicycle ever designed and built.

An original futuristic interpretation for connoisseurs, this Tino Sana bicycle is a peerless art piece that combines content and form while exalting technology, culture and passion.

All parts of this unique city bike are completely made of wood, except for the mechanical parts (gears and joints).

Every detail has been patented, including the pressed layers of beech and ash wood with hard wood inlays and the aluminium mechanical parts glued to the frame using high-bond strength urea glues.

Meticulously assembled with parts of the highest quality, this bicycle is a jewel made for contemplation; it fascinates the observer and exalts the owner.

Both men's and women's models of the bicycle come in five different waterproof colours (yellow, walnut, red, green and pink), have six gears and weigh about 20 kg, more or less the same weight as a metal touring bicycle equipped with all accessories.

Each Tino Sana bicycle is a unique piece branded with a number burnt into the wood and comes with a certificate of authenticity. A timeless work of art outside the bounds of fashion.

Andrea Baleri
The artist Andrea Baleri was born in Bergamo on 15 July 1980 and lives and works in Albino, a town in the province of Bergamo.

While in high school, he took part in a special project promoted by the Local Education Authority of Bergamo and in 1998 began attending classes at the Accademia Carrara di "Belle Arti" in Bergamo.

One of Andrea Baleri's works, titled "I am satisfied", is on display in a meeting room at the Persico headquarters.