Atalanta B.C. and Persico Group are delighted to announce a new partnership agreement: Persico has become part of Atalanta World as an Official Partner.
As Luca Percassi, CEO of Atalanta B.C., states: “It is a pleasure, but above all a source of pride, for us to collaborate with companies that are leading names  in their respective industries; even more so when, like Persico, these top-tier organisations are based in this part of Italy. The modernisation of our stadium is not only a significant project – it is something that is particularly close to our hearts. With Persico, we have set out on a journey that, I’m convinced, will provide a great deal of satisfaction to both parties”.
Marcello Persico, Persico Group’s Vice-president, Finance & Strategy, adds:  “It is an honour for us to participate in the construction of “our” stadium through the production of the moulds for the seating. We like to support the area in which our families live, where our children are growing up, and it would have been remiss of us not to contribute in some way to the Atalanta project, which encompasses both the team and the stadium. Having started out in Serie B, Atalanta has gone on to qualify for the Champions League – this is very much a model for us to follow as a business”.
In the cover photo, from right to left: Marcello Persico (Vice-president, Finance & Strategy, Persico Group);  Luca Percassi (CEO, Atalanta B.C.);  Cavalier Pierino Persico, Founder and Chairman, Persico Group 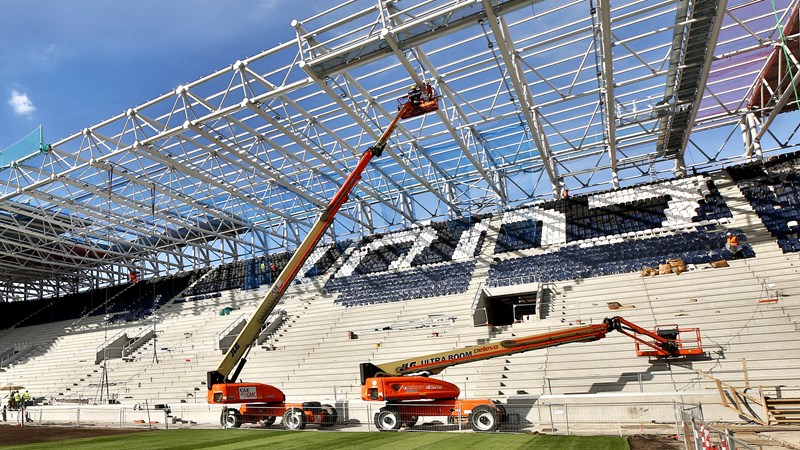 PERSICO GROUP
A world leader in the design and manufacture of moulds and systems for the automotive and industrial sectors, Persico Group is also a world-class builder of racing yachts and performance cruising yachts.
Founded in 1976 by Pierino Persico as a maker of templates for wood, the company – based in Nembro (in the northern Italian province of Bergamo) – has garnered an enviable international reputation in the design and manufacture of moulds and turnkey systems for a plethora of applications.
The three main sectors in which the Persico group operates are: Automotive, Industrial and Marine.
Persico Group is continually developing its market relationships, with the Architecture, Aerospace and Healthcare sectors currently providing the source of numerous high-profile projects.
For some time now the founder has been supported by his three children: Claudia, Alessandra and Marcello. “Persico” is a byword for the very best in Italian manufacturing excellence.